I managed to read 25 books in 2016 and I hope to finish two or three during my Christmas break.

The Prince by Niccolo Machiavelli
Prisoners of Geography by Tim Marshall
Focus by Daniel Goleman
Homo Sapiens by Yuval Harari
Homo Deus by Yuval Harari
Startup Nation by Dan Senor and Saul Singer
A Funny thing happened on the way to Enlightenment by Lenny Ravich
His life biography by Jak Kamhi
Arrested by Can Dundar
Blockchain Revolution by Don Tapscott and Alex Tapscott
An Intelligent Person’s Guide to Education by Tony Little
Power of Palace: Geography, Destiny, and Globalization’s Rough Landscape by H.J. de Blij
Never Give Up: Jack Ma in his own words by Suk Lee
Germany: Memories of a Nation by Neil MacGregor
Confession of a Sociopath: A Life spent hiding in plain sight by M.E. Thomas
Facing with our own history by Emre Kongar
Acknowledging what is: Conversations with Bert Hellinger by Bert Hellinger
Incognito: The Secret Lives of the Brain by David Eagleman
Blimey! from Bohemia to Britpop: The London Artworld by Matthew Collin
This is London by Ben Judah
Heart of Darkness by Joseph Conrad
When Breath becomes Air by Paul Kalanithi
2014: The Election that changed India by Rajdeep Sardesai
Last night I Dreamed of Peace by Dang Thuy Tram
Memoirs of Ataturk’s Servant by Cemal Granda

Of course, you learn something from each book and each book has a relative value to each reader. If I were to suggest only three books to read from this list of great books, they would be the following:

Both books by Yuval Harari are great and I believe I have already given at least 40 volumes as gifts to my colleagues, friends and clients. In particular, Homo Sapiens is a must read. For those who have not read my review of these two books, here are the links:

Incognito is also another great book which confirms that while most of us think that we know everything, our brain plays tricks and we are, in fact, missing a large part of the world. I also published a review of this book a couple of months ago.

Finally, The Prince by Machiavelli is a classic and I bought this book during my summer visit to Florence. I think this is the sort of book that you should read every few years.

I would like to take this opportunity to wish everyone happy 2017! 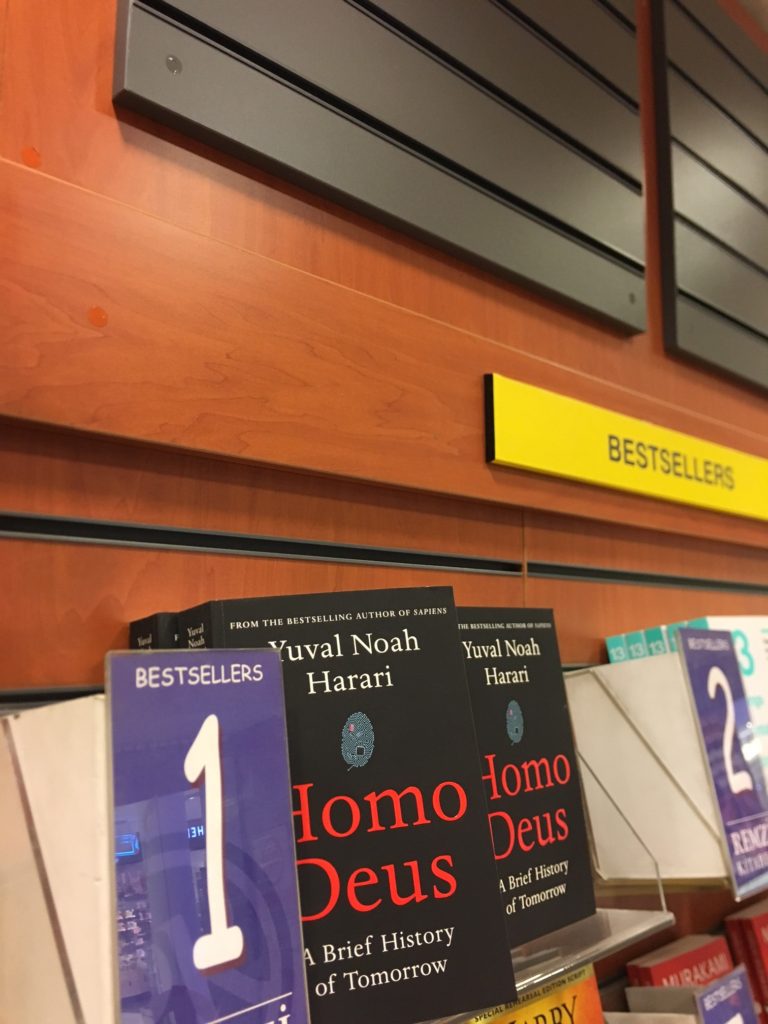 Homo Deus is the second book written by Harari and talks about the future of mankind. Since Deus is “God” in Latin, he argues in his book that a new religion called Dataism to raise and humans will not need gods anymore since we will very accurately predict what will happen or who will do what by the help of gather data.

The book starts with striking statistics about the past and the present. Almost three million people–15% of the French population–starved to death between 1692 and 1694.  Today, more people are dying of diabetes, which is linked to being overweight rather than a result of starvation.  According to Harari, in 2014 more than two billion people were overweight compared to 850 million who suffered from malnutrition. Half of humankind is expected to be overweight by 2030.

Some of the quotes from the book that I really liked:

“Sugar is more dangerous than gunpowder”

Does the above quote remind you of someone?

“Historians don’t ignore objective factors such as climate changes and genetic mutations, but they give much greater importance to the stories people invention and believe”

Like in his first book, Sapiens: A Brief History of Humankind, in Homo Deus Harari emphasizes the power of stories whether they are true or not. Actually my interpretation is; the less likely they are true and superficial, the more likely the people will listen.

Another point Harari argues is that humankind’s definition of knowledge has kept changing since the Agricultural Revolution. We were simple creatures during this time, so knowledge for reading the scriptures and applying and applying our logic.

Then the Scientific Revolution came and everything focused on collecting data and trying to find meaning for the gathered data.

Finally in 21st century, as much as we are confident about ourselves, we care more about our life experiences and our sensitivities.

Another provocative fact that Harari argues is that there is no free will, and that free will can be manipulated. With the help of technology and data, machines know much better than what we will do or choose. Harari argues that companies are using this to manipulate us. In other words, Harari says what you think you want to do may not be really what you want to do.

He strengthens these points in the following sentence: “We are about to face a flood of extremely useful devices, tools and structures that make no allowance for the free will of individual humans”

Fascinating and provocative! Isn’t it!?

Harari also argues “In the 21st century we might witness the creation of a new massive class: people devoid of any economic, political or even artistic value, who contribute nothing to the prosperity, power and glory of society”  I personally did not get this point. Since societies are manipulated, how can they have this massive new class?

Some other provocative thoughts in the book are about collecting personal data.  Harari states “In the 21st century our personal data is probably the most valuable resource most humans still have to offer, and we are giving it to the tech giants in exchange for email services and funny cat videos”

“After 300 likes, Facebook algorithm can predict your opinions better than your husband or wife!

Yuval Harari is a young and great visionary writer. He definitely make my 2016 and led me to think as well as learn a lot!  He offers great opportunities for readers to think and learn. Harari’s Homo Deus is highly recommended.  His first book, Sapiens: A Brief History of Humankind is suggested as a prerequisite to Homo Deus.

I believe he will be in Istanbul on January, 25th which I am planning to fly and meet him in person!