Whilst I was studying as an undergraduate in Turkey in 2003, I was asked by my professor to present an alternative plan to the EU for Turkey.

Back then, Turkey was struggling to start accession talks with the EU on the back of several issues.

My very basic plan then was to bring Turkey together with Israel and the GCC—the Cooperation Council for the Arab States of the Gulf (Kuwait, Qatar, Bahrain, Saudi Arabia, Oman and the UAE)— and I named this project Sukru’s Utopian Alliance. 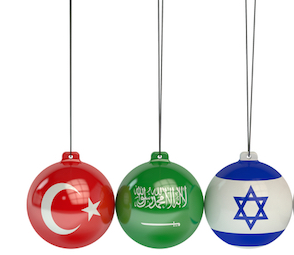 When I presented my plan, it received some attention from my fellow students and the professor, but I have to say that they were not truly fascinated by the idea.

While I was on holiday for two weeks 13 years later, my brain somehow started again to ponder on the same project, and this time I am more equipped to address the issues concerned.

When we look at the reasons for the foundation of the EU (formerly the EEC), we see that it was necessary to form bonds between European countries such as France and Germany to make sure that their economic interests were aligned in order to avoid another world war in the coming decades.

Even though the EU has suffered in the last couple of years, at least the aims of bringing economic interests onto one platform and preventing another world war have succeeded.

The EU does not want to allow Turkey into the Union, at least for the foreseeable future. The GCC and Israel have no chance of joining the EU since their lands are located entirely in the Middle East.

Turkey and Israel have long historical, economic and cultural ties. In fact, Turkey was one of the first countries to recognise Israel. Furthermore, Turkey has fairly good relations with the GCC. In this equation, Turkey can play a key role in bringing Israel and the GCC into a union.

The part of the equation which is clearly hard to solve is how can Israel and the GCC agree to be on the same economic platform?

From Israel’s point of view, the country has developed economically and reached around USD 40,000 per capita. This is a tremendous success without any natural resources. In the meantime, there is a continuous security threat which reduces the country’s true potential and Israel, like any other nation, does not want to fight continuously with its neighbours.

From the GCC point of view, the USA is already rapidly diversifying its energy needs and they are very likely not to need as much oil from the Middle East as is currently the case. We can already see the effects of this, as the USA does not show the same level of interest as previously.

If the GCC is not able to diversity its income sources, it faces a big potential economic threat. Places such as Dubai and Qatar are trying to achieve this diversity fast, but since human capital is mainly imported, I personally do not see the current system as sustainable.

And the GCC does not really function very well alone. Interestingly, there are also some internal conflicts. It is no secret that Qatar and Saudi Arabia do not get along very well.

Turkey has relatively cheap labour, massive land and a skilled white collar work force. Israel has a huge talent pool, where the proportion of university graduates in the country is the highest amongst the developed world. Furthermore, not only does it have a wealth of graduates, but it supports a culture with an entrepreneurial attitude.

The GCC has an extensive land area, and still valuable natural resources such as oil and gas, but it lacks human capital. These different parts of the equation can combine to help create an economic union to leverage their potential.

A potential union will not only help us to solve the conflicts between the countries quickly, but also could potentially draw people closer and help them to understand each other better.

I know it sounds like a utopia, but big achievements always grow from what many believe to be impossible.

Of course, we also need politicians with clear intentions, no hidden agendas and international support to establish this platform.

A project on this scale would be a stepping stone for the Middle East and the end of its bloody history.

So why not try?